The chocolates arrived safely in Peckham yesterday, only to be eaten by all my colleagues, if Jonathan’s text is to be believed! 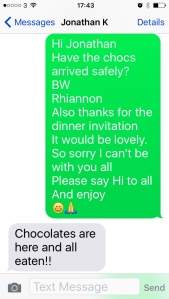 The locations of the bowls and the distribution of the chocolates will be up to my colleagues so I have no real idea if they will be on plinths displayed as ‘artwork’ or scattered around more informally.

I’ve been distributing invitations to the Show and the Public View on Crouch Hill, around the various communities I work and socialise with, have posted some invitations and chocolates, and pushed some through friends’ letterboxes.

If people have been involved in some way with the project they will be invited as well as friends..so dog walkers, carers group, leisure artists,  ( you can see the enthusiasm!) geocache advisor, chocolatier, printer and courier…… 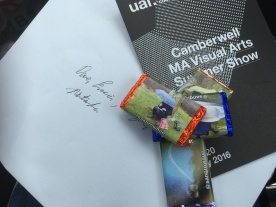 I will also put some invitations in a map holder and fasten it to the Trig Point at the summit. Some of the people who have been interacting with the ‘building development‘ may be interested in coming….

I’ve also sent the usual email invitations to the Show in Camberwell and will circulate via Twitter and have a few chats on Periscope beforehand to invite regular followers.

I hope, on this occasion, to have a meeting of communities ; Crouch Hill- Camberwell- Periscope.

I also have a loose programme of events for viewers during the Show, ensuring that something is present on my Twitter feed and Periscope app ( where there will be interactive cuhatvia the Live Stream)  whilst the Show is Open.

The Public View is rather more ‘structured’ as the other events depend of people who have said they are interested in being involved being available on the day……..so below is ‘sort of a plan’.

Claire Winfield will be on an archaeological dig in Dorchester-THames but will be joining us by Periscope, and Martin Winfield will be watching on the desktop app and calling in on his mobile from ‘his’ mountain in Mid-Wales….or at least that’s the idea.All the events will be Live streamed via Periscope.

Prior to the event within 24 hrs of start of the Show. It is John Clare’s birthday (1793) and I will be reading  some of his poems about enclosure. The town of Banbury, here,  borders Northamptonshire where Clare lived and wrote.

I also plan to re-install Ordnance Survey  and read from the Wikipedia texts in the piece.

The  Public View, at the summit of Crouch Hill, will take place simultaneously with the Private View at Camberwell.

I intend to perform a symbolic ritual of exchange of a Covenant of Salt. I will give visitors small hessian bags, hand made by an upholsterer in Poole, Dorset, from re-cycled hessian. The bags will contain salt. people will be asked to mix salt from their bag with salt in someone else’s. The grains can never be separated…..and so, a lasting bond is formed. This has some origins in Biblical Scriptures  but this is not why I have chosen it. It is also performed at weddings. The significance is the prescience of the old Salt Route, The Salt Way, which runs along side Crouch Hill and was used to transport salt from Droitwich to London. I feel it links up with many of the ancient salt routes which network across Europe and Asia in a similar way to networks and systems today.

There will also be Magic Slates which are a playful mimic Freud’s Mystic Writing Pads.

I will take the wooden buildings previously used in this events here, as recently, the encroachment of housing development across the boundary to the area, formed by the Salt Way, has been of local concern.

There is also a link to Lefevbre’s thoughts on urbanism.

I will also take, as far as possible, all materials, props and remnants that I have used in previous actions and events, for re- mediation/ re- animation  through conversation during the Public View.

The Camberwell College invitations that I have adapted ask people to bring drink ,and their dog if they want. I cannot carry bottles there…but I will prove some refreshments ( and the chocolates)  as in a Potlatch ceremony of exchange or ‘gift’…

Most people ask “What it it rains”….well I will be in my tent… or under the nearby trees in my waterproof.

I may or may not leave my tent up for the duration of the Show as a longer- temporary occupation…….I haven’t made that decision yet.

Reading aloud from John Ruskin’s lecture  Work  delivered at the Working Men’s Institute Camberwell  in 1865,( which I think is now the South London Gallery……..?) to link my location with Camberwell.

Any one, none  or more of these things……depending who is available and when. All are interchangeable.

Paul Mobbs, local Quaker historian and activist telling his history of Crouch Hill and the area.

A Skype chat with Juliet Henderson, the linguist  from Oxford Brookes University, I met on the 205 bus, discussing Derrida  and ‘differance’.

A resident of nearby Broughton Castle and relative of William Fiennes, (1st Viscount Saye and Sele (28 June 1582 – 14 April 1662) , English nobleman and politician during the English Civil War) talking about his knowledge of Crouch Hill.

Me reading aloud from various history books and novels about the area, possibly reading from Benjamin’s Arcades Projects,  or W G Sebold.

A visit from Jane and Richard, caretakers of the Reading Room, Croughton linking this project with my Research Paper.

Snakes and Ladders or Scrabble with a  local theme via Periscope 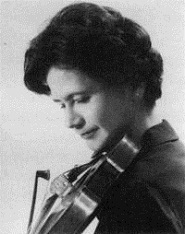 A tribute to Edith  Eisler, who died on this day in 2011. A refugee from Vienna in 1940, musician and friend of my father’s, whose legacy has provided me with the funds to follow this course. Looking at her letters to my father during WWII and listening her play the violin.

19th July Reading the iChing and reading from Philip K Dick’s The Man in the High Castle.

On the 20th July I will visit Camberwell for a Final Crit with the group and then go with Clara Duran to meet other artists for discussion about the wonderful Residency Opportunity in Sortland , Norway……!!!

Legal and ethical implications of Live Streaming as Art work

This article in Computer World about the legal risks of Live stream expresses some of my concerns about using the app for my practice.

As well as the issues around broadcasting from sensitive locations such as The Edgehill Battlefield Site/ MOD Kineton  there are ethics and personal community responsibilities around that, particularly at such a sensitive time.

I remember being told about  Gillian Wearing’s renowned work, ‘Signs that say what you want to say and not signs that say what someone else wants you to say’ (1992-93)  and  how this caused some ( ?legal?) difficulties when some of the people photographed found their images widely distributed, displaying their personal feelings to a wider public.

Things have moved on a pace since then, in terms of methods of distribution and attitudes to it…from one extreme of needs from signed permission to animate photos on Snapchat and other social media.

I may be erring on the side of caution because of the necessary restrictions within my community work, but best to be aware and think it through.

On 25th November  there was a Pop-up Show at college

I was working on the day of the set-up and show as I changed my workdays at the beginning of term, so couldn’t get down to be  involved.

Instead I decided …at very short notice.. to hold my own screening at home and broadcast it via periscope and a Youtube Live Stream

I invited a few friends round for the screening ( wine, nibbles etc), set up the projector, desktop etc  and ran a trial at lunchtime – which worked

I was fiddling around doing some bits of edits to a couple of short pieces I’d madeEdge Hill videos 1 and 2 and variations in a hurry just the show opened in Camberwell at 5.30 that I didn’t notice (stupid!) the little ‘successful share’ box positioned itself right over the ‘Go Live’ box on the Hangout…

I was so busy opening the door to the ‘audience’. ( Yes some people did come, unexpectedly!) that I still didn’t notice… being a lifestream novice…. That although one box said Live Stream…. I wasn’t broadcasting. Didn’t realise until after everyone had left. So a Big Lesson learnt…

Jonathan ( tutor) did have a look after the show to see my Stream but of course it wasn’t there ( FAIL) However….

I did Periscope for most of the event and have yet more screen shots to show that I did actually have an audience, in total for about 1 hour. 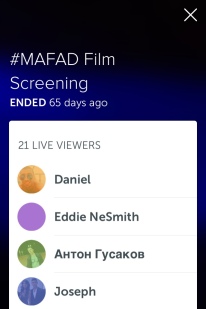 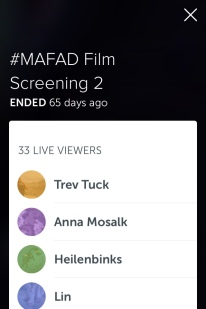 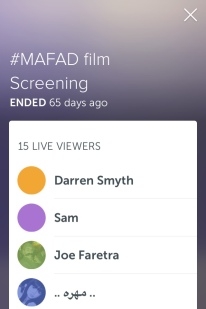 Rather annoyingly, I stopped broadcasting when the post- screening discussion really got going so don’t have a record of all the Crit.

My aim had been to screen the videos and some of the old work via Periscope.

I thought that the discussion and the event itself,was being recorded via the Live stream…….but not the case.

Anyway the evening was very useful with much discussion about duration and Sebold, and some very clear crit about the voice over referring to Jihady John seeming like a red herring as it has no clear link to the Civil War…

I guess I have to be sure what it is I am saying.

This came across when the other videos were viewed and discussed

I’m still not sure if I want to do this as I feel the political, though important, is only a way of illustrating simultaneity, as it is what is so widely reported and also of significance and impacting upon out day to day.

Maybe I need to bring more of the ‘everyday’ in.

Part of me wants it to be intangible and fluid and open to lots of personal and wider interpretations.. about time and place, personally and socially- politics is inevitable in the mix, but I think I have used it more as a tool of illustration.

Problem is, the topics at the moment ( and the ones I choose to use) are so ( too?) potent.

Also there was discussion  about the use of hashtags to attract people to the posts and how to/ whether to aim for attracting a large audience.

Is a large audience what I want..? Is a selected audience what I want?  Do I want people to find it by accident? There was lots of discussion and clarification by me of my intentions..and confusion when I was asked things I wasn’t clear about.So all in all an excellent Crit.

Anyway, all in all it was extremely good practice, yet again, to fail, yet again, at Live stream and consider the implications from a practical/ technical and curation point of view of using a distant Broadcast as part of a Show…

One other point that was made was how I’d got the projector, media player, desktop, phone etc all set up and positioned on my old furniture…1920’s piano stool, 1930’s roll-top desk…etc.juxta-positioning of old and new and all that… and relevant.

Here’s a dreadful still from the broadcast of Frances and Martin, post-wine and mid-crit. 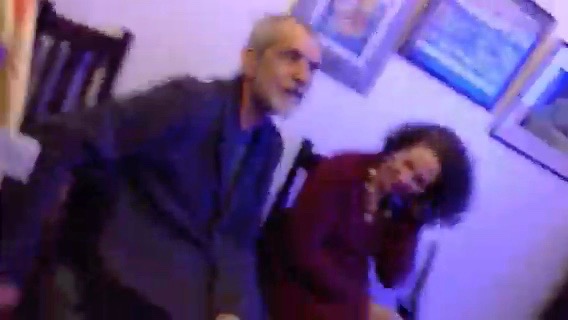