Well my analyst would say a lot about that title..if I had one..

and I probably should have…

I have realised that I haven’t actually posted details of the things I was doing before Christmas!

I was thinking so much about what I wanted to do that I forgot what I had actually done.

I liked the greaseproof paper effect.

It was after this That I started to use the two analogue projectors facing each other and think about the space where they meet.

But here for the record are some vids and photos.

I know the keystoning is out  but I don’t care I wasn’t look ing at that or thinking about it.

This is not finished work so I am just messing.

I really want to keep the frame of the vids so it is evident that they are made on a phone.

Something about me as an artist or whoever shot the vid as being a participant who is present with the spectator…does this make sense?

Just to keep it on the same page, here are some of the black tissue /two slides projections again.

I had a frustrating day on Friday scanning slides. I faffed around as often happens when you do something you haven’t done before and then had to stop to go out to the post and video something of the fair before it opened, just as I felt I had got going. I put them together in a movie which does nothing interesting at the moment as they are all different scenes with nothing tying them together closely enough in time. Here is one though.

Handwritten on the back is ‘ Mabel’ They remind me a little of Ed Ruscha’s swimming pools. Old Kodachrome slide film. I was too late for the fair, it had started, had to walk back as no parking and chimney sweep arrival,  but then couldn’t get the scanner to work properly and the sweep was late. Went outside to see the brush emerging, at his invitation………..

Is this a superstition? I feel it must be…or maybe just to show he’s done the whole chimney? Also scanned some cling-film.

This is turning into a bigger experiment.

Went to the fair to video something ‘in action’.

Rode the horses, walked round the mirror maze, shot corks from rifles, watched people spinning in drums, on Waltzers and at various heights and angles.

Saw the fair men jumping on and off the rides but when I got back realised I’d run out of phone memory for that bit …an astounding show against a backdrop of lasers and very loud adrenaline pumping music, so just a morsel rather than a full meal.

Lots of footage of Claire and other people’s bums as I was trying to film with my iPhone at waist height having seen the beginning of  ‘Metro Manila‘ and its effective city arrival footage.

Not quite what I was after so will have to be edited (not my original intention). I like the chance element so much that I won’t see what i am doing until after incase I interfere with it. So I may have to discard or search for what I need when I’ve watched it back more.

A great evening though ( ‘You can take the girl out of Blackpool…..‘) and a wonderful antidote to the frustrations of the day.

The first time I have been to the fair without children, my own or other people’s, for 20 years! I wanted footage as this only comes once a year and then is gone.

Still there at midnight and by 7.30 am the traditional market is up and running in the Market Place. It’s one of the old ‘Mops’, a hiring fair post- harvest when everybody celebrates the cropping and stops after the hard work. It was always so tangibly significant to me when I worked in agriculture and had hauled sacks of grain and my nose was full of grain dust. Full of personal significance too as Sam was born a few days after its arrival in 1994 and other memories layer the repeated experience.

After our ride on the horses I mentioned a favourite Enid Blyton story to Claire, where the horses escape from the carousel and ride off into the countryside. She knew it too, from her childhood …another shared experience, as well as our father’s time in Changi. 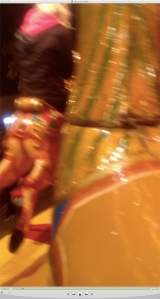 I reminded myself and her that I must find a field of suitable soil to make the earth binary piece.

I slept well after a Thai meal and walk home in the warm but heavy rain and, at some point,  thought of a shower of glass noughts and zeros to be distributed amongst friends and passed on as material digital ‘sharing’.

Yesterday I remembered David Medalla, who almost came to CSM to talk to the 4D students in 2010. The first video I found of him, when researching today was of Migrations at Tate Britain.

It starts with him on the boat from Tate Modern to Tate Britain…. Boats! Again! Not sure what this means.

But there is also a lecture I want to watch (at Stockhom Assembly  October 2013) and make notes from as below:

This set me thinking of showers of grain……a bit like D. Medalla’s bubbles but moving in a different way. Links: Australia, Phillipines, Singapore….