This post is rather a confusing mix about non-linearity and how to present it .

EDIT  March 5th : I’ve been thinking more about this after my Tutorial with Rosie Sherwood when we talked about  non- linearity in comic books, Structure vs non- structure,… the gutter…as a space for the imagination... and how she saw Ordnance Survey installation as a book

This is a ( becoming) long post which hopefully covers the main points of what I’ve been thinking about recently.

I’ve been going out and about, looking at sites/ making and placing things and doing some fairly casual streaming which I’ll cover in other posts but an example here

One of the key concerns that has come out of the process of writing the research paper and its conclusions has been my tendency to and desire to continue to use non-linear narrative in my process and ‘finished’work, whatever that is…..

I’ve been really wrestling with these complex ideas and going round in circles/ getting tied in knots but by discussing things verbally and scouting around on- line.I  realise this is how I approach things generally, in my practice and in my life as a whole.

I spoke about it to Gareth Polmeer when I was writing my paper…We discussed whether the paper would be finished by the deadline…Personally I felt it was.. though not in a formal academic sense.That’s sort of the point…No beginning…no end.

Personal experience and how it has impacted on my praxis….

This same sort of struggle is occurring in my cognitive experience. I’m constantly frustrated at the moment by my difficulties with information processing and memory. To this end I have an appointment with my neuropsychologist at the end of January. Its taken a few months to come around but that’s useful, as actually I am clearer now about the nature of the ‘problems’ and how to describe them to him.

I love in many ways how this effect/ symptom has highlighted what I believe is one of the essential conceits of my practice HOWEVER to demonstrate this visually  and avoid incomprehensibility is difficult.

I struggle more and more with organising the work I make and remembering what I have done or thought!!!

From a philosophical point of view I’ve always been a bit ‘sniffy’ about Deleuze and Guattari’s rhizome...Not because I don’t agree with the concept but because I think ‘ Of Course!’… ‘what’s new’…it seems common sense to me…

and also because I get unreasonably cross with the use of botanical and wider biological metaphors… it crosses an academic boundary which I find difficult. ( Yet I enjoy this boundary crossing usually…?) I feel their  interpretations are not necessarily scientifically  accurate  or fully understood and it bugs me…despite the fact that I know thats not the f***ing point.

Petty but true and rather Binary of me I know….what ambiguity is this… thinking one thing and feeling another… As a botanist I understand the Rhizome and the Arboreal in terms of apical meristem / xylem and phloem and the physically tangible if organic.

D& G’s use of the same terminology grates unreasonably and the differing interpretations serve to confuse not clarify for me. So it’s a language problem for me, I guess, not a philosophical one…

Derrida  ‘feels’ fine to me with his thinking around  archive and Pharmakon poison/cure  etc….which I understand in a sensory and intellectual way.

I had avoided reading D&G for the above reason which is pretty daft!!!

The first lecture  highlights the concepts of Connection- any point can connect to any other point to form Multiplicities and then larger Assemblages. I started to think about assemblages of social spaces and how this fits with Doreen Massey and Lefevbres thinking… I’ll cogitate on that one.

Also a little about heterogeneity and deterritorialiazation/territorialization described as per Wiki ( !) :

This means the removal of cultural subjects and objects from a certain location in space and time. It implies that certain cultural aspects tend to transcend specific territorial boundaries in a world that consists of things fundamentally in motion.

The lecture describes things from an ‘evolutionary ‘ viewpoint and again there I start to misinterpret because of the language used..and my prior understanding of the terminology gets in the way. I can almost feel it, physically…

However, then the lecture describes

This makes far more sense to me and also makes sense of what I did when writing my Research Paper and what I am trying to do in my making.

and this analysis of Memento and Switching

It make me wonder how I could be able to  include live feed from periscope on a storytelling platform and whether this is worth investigating. My lack of technical knowledge restricts me, but maybe I could access some through Oxford Hackspace?...

I discovered sites for Structure and coding  to build non-linear narratives on the web like this :

I have to decide whether this is the way I want to go, or whether I can get over the difficulty another way.

I looked at other ways of digital storytelling  such as  Frank Chimero- The Web Grain ,as well as Storify, which Jonathan suggested, and other platforms. 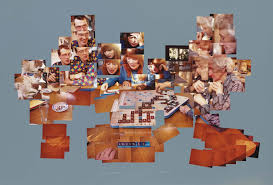 Here is a video about how Christopher Nolan and his brother ” Tell the story backwards” in Memento.

They use repetition and internal echoes,  with objectivity  in B&W as documentary.  The chronology is forwards but as it progresses objectivity become more subjective..subjectivity  indicated using colour.Eventually start the viewer and protagonist start to question this and it becomes less subjective.

Scenes start to meet in the middle of the movie, but the audience are denied the knowledge that the protagonist is denied….. which leads to tension between the subjective way in which we have to experience the world and faith in objective view- more comfortable.

So the movie is powerful because it alternates between belief and disbelief. At the end the objective and subjective meet. It is still subjective but with enough objective information to question it. He also uses Polaroid images but by reversing the play so the image fades away…

Some very interesting techniques of Film-making and it is helpful to think about the various ways of mixing, blending and alternating past and present to create the non-linearity.